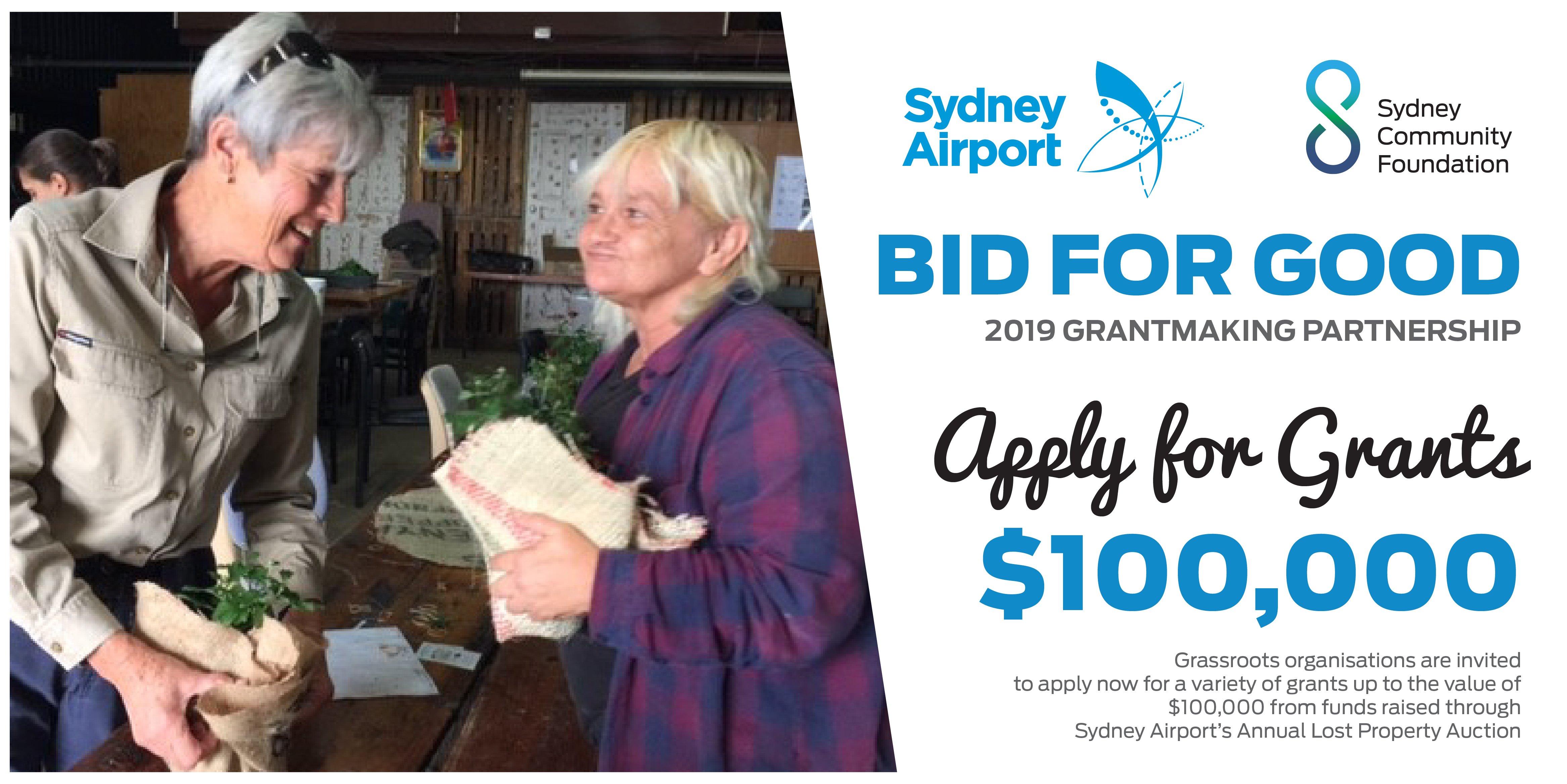 Thank you to our 2019 applicants

Applications will now be assessed and shortlisted. We anticipate announcing the major grant recipient in the week prior to the Sydney Airport Lost Property Auction which begins on 19 August.

The smaller grants will be announced mid October as these depend on the results of the auction.

Please help us spread the word of the auction and you too can Bid for Good.

Thank you for your interest and we look forward to sharing the work of our local community partners with you soon.

You can see how this partnership in action in the video below of 2017 grant recipients below.

This year will see the award of another $100,000 grant, in addition to a number of smaller grants.

Sydney Community Foundation and Sydney Airport are called for applications from charities for this year’s grants, with 2019 campaign attracting many wonderful projects run by local changemakers situated in the suburbs surrounding Sydney Airport.

The Auction is run online by Pickles from 19 August 2019.

Money raised will be distributed by Sydney Community Foundation to successful local grassroots charities in the suburbs surrounding Sydney Airport with a focus on the following four key cause areas:

Applying charities must be registered DGR1 and delivering programs for people in need in the LGAs of:

As Sydney Airport is Australia’s gateway, Bid for Good is also interested in receiving applications for projects within the above focus areas that:

Sydney Community Foundation, established in 2004, has over a decade’s experience connecting philanthropy with Sydney communities in most need. As small grant specialists, SCF has overseen the distribution of almost $5 million to innovative, local grassroots charities who design and run projects that support people at greatest risk in the Greater Sydney area.

Together, Sydney Airport and Sydney Community Foundation invite those (DGR1) organisations who are doing great work to improve the lives of people in need across Sydney to express interest in receiving a grant from the Bid for Good 2019 Lost Property Auction Partnership.

Preliminary communication materials to be submitted with the completed application:

N.B. Apply only if you are able to provide the following at project completion (acquittal):

Yes. To give each application due consideration and help us streamline the process, if you don’t have one already, please create a Google account for your application.

Can I go back to my Application once I’ve started filling it out?

It may be possible, but not guaranteed. To ensure you don’t lose data, please download the application form as a word document here and then cut and paste your answers into the Google form when you are ready to apply.

What is DGR1 status and do I need it to apply?

Yes. We are only able to grant to Deductible Gift Recipient (DGR) registered charities, and specifically those of DGR1 status. If you’re not sure, please check with your organisation’s finance team.

My organisation is located outside the priority LGA’s, but the program will be delivered within can I apply?

Yes, as long as your program is supporting people in need within the priority LGAs listed in the selection criteria your application will be considered.

My organisation is located outside the priority LGA’s, can I apply?

Priority will be given to programs delivered within the LGA’s listed in the selection criteria.

Which organisations are not eligible for funding?

Sydney Airport Lost Property Auction will take place from 19 August with a viewing day for bidders on 19 August 2019.