Warning: Parameter 1 to kc_action_the_post() expected to be a reference, value given in /home/customer/www/sydneycommunityfoundation.org.au/public_html/wp-includes/class-wp-hook.php on line 310

The Hon Virginia Bell AC will deliver the 9th Maybanke Lecture.
Her 2022 Maybanke Lecture will address the achievements and the missteps in implementing a ‘feminist agenda’ in the administration of criminal justice in NSW over the past 40 years.

Maybanke Wolstenholme joined forces with Rose Scott and others in the campaign to raise the age of consent to protect young girls against exploitation. She recognised the link between prostitution and crime and, more generally, she had the enlightened (if optimistic) view that we would be better-off investing in early childhood care and education than in prisons.

Virginia Bell has witnessed notable changes in the treatment of women and children complainants, particularly in sexual cases. At the same time, on the other side of the ledger, we have seen a dramatic increase in the number of women in prison, a development that Maybanke would have deplored.

This will be Hon Virginia Bell’s first major public speech since her retirement in February 2021.

The Lecture will be live streamed should you not wish to attend in person. 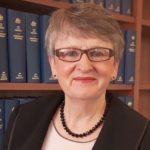 The Hon Virginia Bell AC has served the law and worked for justice in Australia for over 35 years. Her work in criminal law in particular, has been outstanding. Virginia Bell was appointed to the High Court of Australia in 2009. Prior to this, she had an impressive legal career as a community lawyer, barrister, public defender, senior counsel, Law Reform Commissioner and Supreme Court Judge. Virginia Bell began her legal career initially as a volunteer at the newly established Redfern Legal Centre. During her seven years at the Legal Centre, she was involved in landmark civil liberties cases and was a driving force behind establishing the Prisoners’ Legal Service.

The Maybanke Fund honours the work of Maybanke Anderson, writer, leader, feminist, early childhood education pioneer and promoter of the rights of women and children in Australia. The Maybanke Fund connects its community of donors with organisations working to reduce social inequality through education, women’s advocacy and social reform – causes that continue to be as important in the 21st century as they were for Maybanke in 1893.

You can make a difference by donating to The Maybanke Fund. Your donation today helps build the Fund for tomorrow and also provides the Maybanke Anderson Award in Indigenous Early Childhood Education, at Macquarie University.

The Maybanke Fund is a sub-fund of Sydney Community Foundation. Make your donation to The Maybanke Fund, and help keep Maybanke’s legacy alive. All donations over $2 are tax deductible.