The Snow Foundation are a generous supporter of Sydney Community Foundation and Sydney Women’s Fund.

We are delighted to welcome Georgina Byron as Chair of the Sydney Women’s Advisory Council.

Find out more about why The Snow Foundation gives in this excerpt of article by Nicole Richards published in ‘Stories in philanthropy’  by Philanthropy Australia .

View the Full Article published in ‘Stories in Philanthropy’ by Philanthropy Australia on 18 Oct 2017, 2:19pm.

Georgina Byron explains why humility, collaboration and transparency are the cornerstones of The Snow Foundation’s philanthropy. 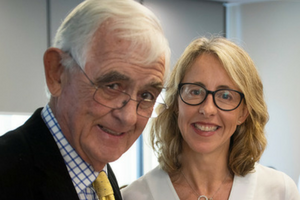 “I think philanthropy is one of those things that can be a bit mysterious,” Georgina Byron, Chief Executive Officer of The Snow Foundation says. “It’s not really in our culture to talk about it.”

Byron, whose professional background is in financial and retail marketing, has headed up her family’s foundation since 2007, but it wasn’t a conscious career choice.

The Snow Foundation  was established by Georgina’s father, Terry Snow (pictured right with Georgina), and his brother George, in 1991 with an initial $1 million contribution and the intention to help disadvantaged members of Canberra’s community. The family had a long history with the nation’s capital, dating back to 1926 when the brothers’ grandfather, E.R. Snow, founded Canberra’s first general store.

“Dad had always taught us that if you see someone struggling, you should always lend a helping hand,” Byron says.

“He’d grown the foundation in a small way for many years then wanted to do it in a much bigger way,” she explains.

“He asked the four of us kids if anyone was interested in leading it. I was on maternity leave at the time with my third child and thought I’d give it a go before heading back to work. When I went back to my old job, I realised that working at the Foundation was so much more fulfilling and I thought, ‘What am I doing?’”

Byron returned to the Foundation and set about increasing the involvement of the entire family.

“I wanted everyone’s input,” she says. “We held a workshop to get insight into the family’s passions and interests and I also did some historical analysis on granting to date. That all led to chunking everything into areas we’re interested in: social welfare, health, education and employment.”

Since its inception, The Snow Foundation has distributed almost $22 million in grants to organisations and individuals.

Humility and honest relationships, Byron says, are two key tenets that underpin the ethos of the Foundation.

“We recognise that our for-purpose partners are the ones with the expertise, we simply enable them to achieve great things.”

While the family values its privacy, the board of The Snow Foundation, which includes second generation members of the Snow family and their partners, is committed to transparency.

Byron, who chairs Philanthropy Australia’s Family Foundations Funder Group, says the benefits of greater openness have been many.

“If you don’t have the door open, you can’t hear what’s going on.”

View the Full Article by Nicole Richards, published in ‘Stories in philanthropy’ by Philanthropy Australia

About the Author: admin